PONY vs. Other Leagues

PONY League vs. Other Leagues

A lot of parents think that youth baseball is just youth baseball, but that’s not necessarily the case. First and foremost, all youth baseball organizations believe in the same, overall principle: we all want the kids to have fun while learning the game of baseball. Beyond that, you may want to consider the differences between PONY youth baseball and Little League baseball.

PONY baseball uses a two-year age bracket system so there is rarely a significant age difference between the players in each division. Little League often ends up with players in the same division who are three years apart. While in Little League, you will frequently see some of the more-talented 10-year-olds get brought up to play against the 11- and 12-year-olds. This can lead to a 10-year-old being overmatched which can also result in lost confidence in that younger player. Beyond that, the younger players often find it difficult to associate with the older players, making it tough to build team chemistry, let alone friendships. The significant age difference can also lead to the younger, smaller players spending more time on the bench instead of playing the game. With the 2-year age brackets of PONY baseball, the players are typically more-evenly matched throughout their days playing youth baseball. This can lead to longer-lasting confidence, better friendships and a better baseball experience for the kids and parents alike.

PONY Baseball’s Divisions are as Follows:

PONY baseball changes the distance between the bases as well as the distance between the pitcher’s mound and home plate as the players’ size and skill level increase over time. This is designed to keep the field at a relative scale to what we see on TV in the Major Leagues. As the kids get older, bigger, faster and stronger, the field size changes in order to accommodate the kids. By contrast, Little League fields stay at the same size throughout a child’s experience, all the way up through 12 years old.

Standard Base and Pitching Distance for PONY Youth Baseball:

These base dimensions are the result of extensive testing and experimentation to determine the size on which players of each age group can properly play the game of baseball. Pitching distance is also scaled to the ability of the player and in proportion to the size of the diamond. The scaled diamonds allow the players to make the plays made by major leaguers. Home runs become a possibility, outfielders can play in a position proportionate to that played by a major leaguer, double plays, squeeze plays and various strategies and tactics, difficult for adults and nearly impossible for youngsters on a full size diamond, become a real possibility rather than an impossibility.

The significance of the different divisions isn’t just the size of the field. Because such careful consideration is given to the field size and the distance between the bases and the mound an home plate, PONY baseball is able to allow kids in the Mustang division and above (9+ years old) to take real leads off the base just like they see on TV in major league games. Likewise, we are able to teach pitchers at a much younger age how to make a proper pick-off move to a base. This adds a more advanced element to the game that Little League does not offer. Also, for kids in youth baseball who want to play at a higher level (high school, college and beyond), this gives them an extra three years to prepare and learn how to read a pitcher’s movements in order to steal bases. At the same time, it also teaches pitchers to pitch from the stretch when necessary to hold runners on base. Because of the scale of the field, PONY’s rules are able to advance the knowledge and “baseball IQ” of the players in every game. 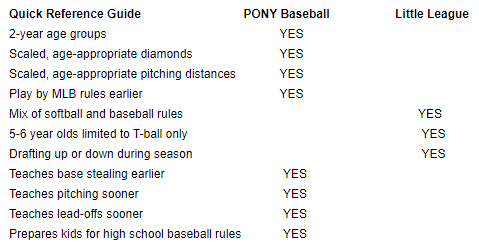